Every time I'm around this area I'm in right now I usually find myself in thoughts.
I have been here many times, but this is the first time I will stay this close to this historical place for time long enough to have a good look at it.
It's called "Avaldsnes" which is likely to be the very spot on where the first king of Norway (all of it, that is, as we had quite a few "kings" before this man as well) had his seat. You might have read about the guy at some point, good old Harald Haarfagre, who was the first man to gather all of Norway under one single king and kingdom.
So his seat was right here at Avaldsnes, making this very spot a quite historic place in the history of my country. As I turn around in my chair at my office right now I see just what you see in the snap I have posted from the place. 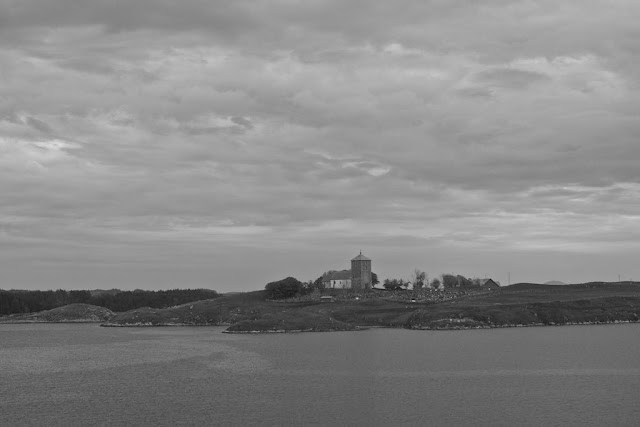 Oh yes, another pixelated one I'm afraid. You might start to think I'm converted or something, but fear not my friends. It's just the necessity of posting a snap of the old kings place taken from just outside my cabin door this afternoon. It was over here, just around this church, it all happened some time ago. I will certainly bring a couple of decent and real cameras over there some other day. I got film in a few of them as well, as it happens. You will have to wait some time for them snaps to appear, though.

The guy was a cruel Viking, to be honest, and a lot of other Vikings had also been around before this man turned up. Born well into the era of the vikings (around year 850), and died well before the time it was all over he did (ca 931-932), so at least he would see the golden years of the time he was living in.
There's some discussions about when this era started, but to say that the people from north started to get things going in the early part of the 700's would be quite right. The beginning of the real horror is a bit easier to frame, as we know it as the day a few of them decided it would be wise to attack the monastry on Lindisfarne. To most people this will be counted as the day the real era of the vikings started. This happened in 793, and was a terror attack as good (or rather bad, as it happens) as any other terror attack we know of.
It will also be fair to say that before the vikings came along there was a number of attacks, also on christian munks and  their monastries. The king of Northumbria, king Aethelfirth, was a very cruel man and did a lot of killing of munks and christians back in the time. Masacres and the like, as we know. There was a lot of fighting around during these years, as the christians and the pagans were not exactly friendly to each other in any way.

Anyway, the viking era did not last for long after all. They were slowly but patiently trained to become christians through the years, and around 1100 their time as fighters and pagans were done and dusted. Most people would say that it all ended with the battle at Stamford Bridge in 1066, but we know for sure that a few of them would still not give up their pagan lifestyle until they just had to.

What did the vikings have then, that made others so afraid of them?
Well, they obviously had their fast war ships which was like nothing else floating on water back in the days. Slim and fast, made to move quickly over a long distance. Neither did they have any fear at all either they were on board a ship on water or in some fight where blood was running in rivers around them. Being pagans they believed that if they only died with their sword in hand they would be going straight to Valhalla to be able to drink and feast all day and night until eternity.
They were chased away, finally, and their era dissappeared as quick as it saw the day of light. Still they are remembered and talked about to this day, and will probably still be in the years to come.

Anyway, it's a nice place Avaldsnes. Nice enough to be the seat of a viking king. I think it was more about the strategic placement of the spot than the niceness of it, though. It would be all about control, I would think, and the opportunity to stop ships to make them pay their tax to the king...
Lagt inn av Roy Karlsvik kl. 22:44