Another week, another course to attend

So, as you might understand I have been a bit busy lately. I suddenly had to attend a three days safety repetition course, so there has been a real hole in my blog posts as you might have discovered. I was scheduled to do the course later this summer, but suddenly got the chance to do it right now instead. So, instead of ruining a good part of one week of the middle of summer, I jumped on this one.
I will soon be back on some kind of a track though, as we managed to persuade the teacher to take two long days instead of three shorter ones. That means I don't have to go there tomorrow. More importantly it also means I now got all courses needed to apply for the new type of certificate I will need to still have a job after new year. Might sound a bit definitive, and it is... in fact. Rules are rules, and any norwegian engineer holding the old type of certificate will not be able to get hold of the new and shiny thing we actually need to still work as engineers after the 31'st of december this year. Might sound like a long time ahead, but bear in mind that they will need a few months to go through all the applications that is coming their way these days. I can only hope my application will be high enough in the pile to make it through the system in due time to have the thing in hand before said date. 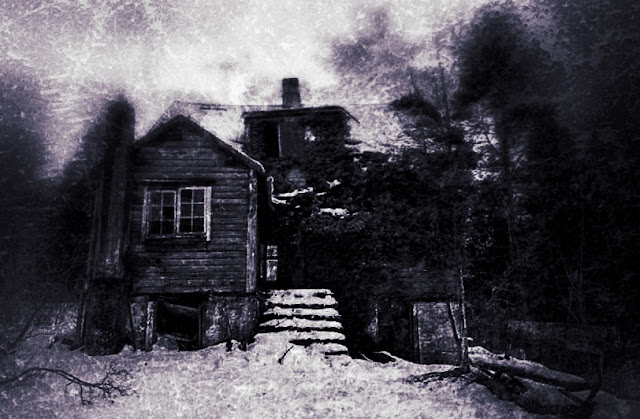 We went over here a few weeks ago, my son and I. Went to see that old derelict house and all, and I don't expect it to still have some kind of a roof and all four walls standing like this a year from now. It still might manage to stand upright, but I doubt it. This is a good blend of film having gone through some serious software on my phone, by the way. I ask you to not take too much notice of that fact. It's just that I like to play around with things inside an app from time to time. It's nothing that's going to last, mind you...!

And, I'm soon to leave for work. Only one weekend to go now, and I will be off some time late next week. 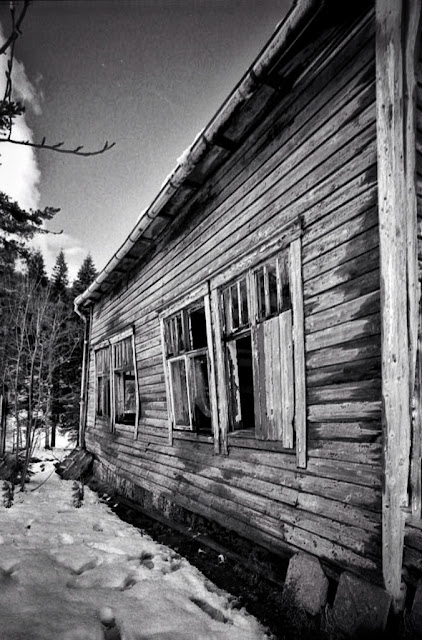 The same house seen from the other side. Same camera, same lens. Most likely that old german M6 camera, and definitely Elmarit 21mm lens with an orange filter.

So, last course done for this time with some boring classroom stuff and some fun outdoor exercises in the water just finished.
First aid stuff, where we repeat how to stitch people together, putting needles carrying all kinds of medicine and stuff inside the veins of the patient, putting on bandages and taping them together and all that sorts of nice things to know when you're out there at sea.
Then we learn about fires and how to lead fire teams. Or, actually it's more or less all about how to make life easier by use of simple things to turn the odds a bit more into your advantage should you be in the position of being in the middle of nowhere having a huge fire on board. A chief engineers worst nightmare, to put everything down to just a few simple words.
Then it's the usual water stuff. As we are surrounded by water in my daily work it's simply a fact that if everything else fail we will need to abandon the mother ship and get our feet wet out there in the north atlantic ocean, or wherever we are in the moment of any given disaster. OK, it's a place nobody wants to be, but we still need to be prepared to go there should that famous shit hit the fan. It's just a part of everyday life when we are at work. So that means I have been into the sea today, in a survival suit way out there... The good thing is that it was a nice day for it as the sun was shining and everything. I still got wet though, but was never very cold or anything.
And, I finally got the chance to try something I have wanted to try for a long time. It was not a part of this actual course, but we managed to persuade the instructor to test the free-fall lifeboat they got on most rigs and some ships these days. OK, our fall was not quite as high as the one I linked to, as that one shows the quite recent world record set by Harding in Norway, but you could still feel your lunch moving upwards for a few seconds there before all the fun was over.
And then there was the usual stuff. Laying like ducks in the water using all kinds of techniques to be able to stay alive out there if all other resque equipment for some reason should fail.
Things nice to have learned and tried in real life, as you probably understand. 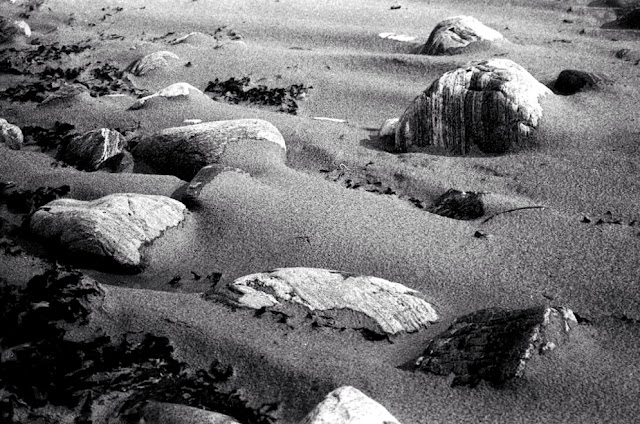 A more or less typical norwegian beach as we know them over here. Some sand at times, but also big stones scattered around the place just to make it different from elsewhere in the world. German M3, Summicron 50mm or 35mm. I think this was Kodak Tri-X drenched in Kodak HC-110 developer.

And no, I did not bring any of the german rangefinders or any other cameras... I might go there some time to see if I might catch anything interesting when other people are doing the course. Maybe. 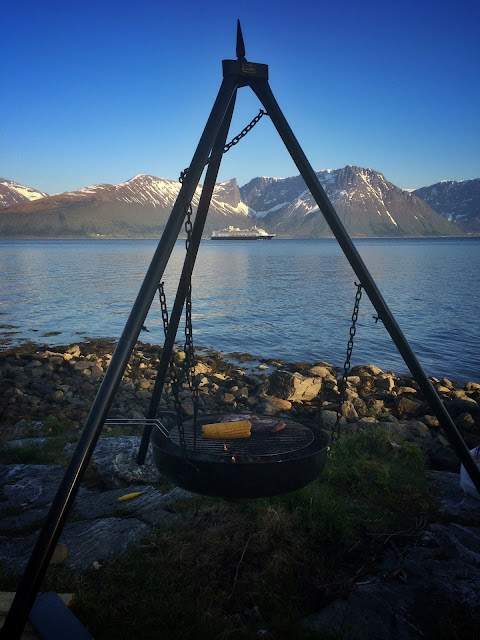 And I had my phone in pocket this evening just as I returned home from a long day at the training field. The wife had a good fire going over there at the cottage, and I decided to use it for something nice. So I found some food to put on top, and it was very good as well. And yes, it's digital... and yes, shame on me!!