Peterhead, some kind of harbour

I mean, who the heck would have got the bright idea back in the days of around 1593 to even fully think out the thought that hey! here's some sort of bay-like schwoong in the terrain, so come'un lets build a nice harbour out of this place where the North Sea is battering this old country in it's wildest ways. And so they did...!
Then, some time in the late-ish 1800's someone would think that the wild North Sea maybe was playing a bit too wild in the streets of the town at times, and therefore thought that a nice little breakwater would fit the place quite nicely. 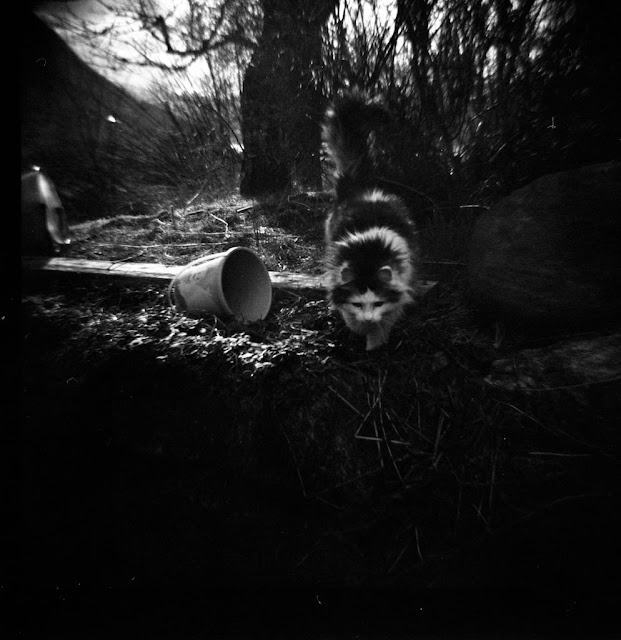 I just found this very nice snap of a very nice cat. Nice fur and everything. It's living over there, where my daughter and my grandson is living. I picked up my Diana F+ and snapped him/her with ease. Well, I just thought this might be a good space for it... so now back to Peterhead!

So they went around for good ideas of how to get the job done. All the carrying of stones and such, as you rightfully were thinking. The answer probably revealed itself more or less, as the Peterhead Convict Prison, Scotlands toughest prison if you like to listen to reputations from the street, was already at the location.
So, they went to talk to the prisoners and made some kind of deal. I got no idea what the dealing was all about, or if there actually was any dealing done at all, but fact is they made them build the southern breakwater of Peterhead bay. A mastodont made out of stone. 2700 feet (around 900 meters) long, and quite massivly wide I would say.
Then, as the southern piece were finished they naturally needed to get hold of a northern piece as well. I mean who would name something the southern-something and not having any northern counterpart?
Starting in the early 1900's and finished some time in the 50's the northern wall was there, most likely for eternity by the look of things. Another 1500 feet of heavy stone. That's where we're moored right now, by the way. At the northern breakwater, some 26 meters or so from the North Sea. Actually the captain himself refers to it as being moored into the North Sea.
It's a horrible harbour due to huge and lots of swell on bad days I have to say, but it's better than no harbour at all. Nothing much, but a tiny wee bit better still.
I also have to say that the inner harbour looks great, as it happens. There would be some rather obvious issues getting in there with any ship above a very limited size though. 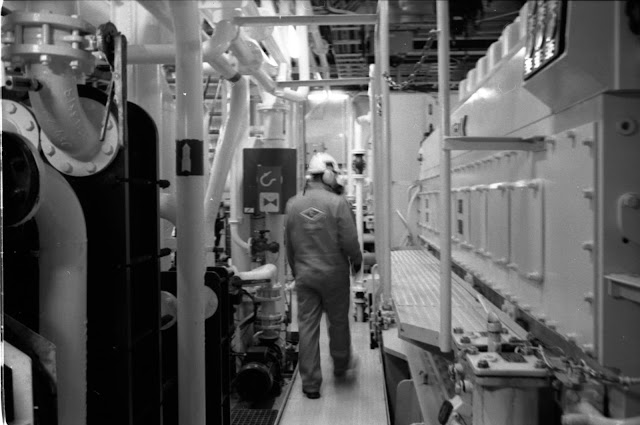 Just had to show you a small part of one of our two identical engine rooms. This is kind of what I'm looking at everyday at work. There's a diesel engine there to the right. It's german, just like the camera from where this snap origined. A noisy german it is, the one inside the picture. And we got four identical ones, making a terrible razzamatazz when they all play together cranked up at 11. And there's a captain in there as well, among all the other stuff. I don't know why he was there, but chance is he was down just to get away from all the stress upstairs...

I went around a small part of town for a quick look this afternoon, just to check if it looks safe enough to bring a nice old camera or two out on the streets some time tomorrow. I think I'm going to go for it. After all, what can possibly go wrong...?
It looked quite alright, at least by the look of things, so I will be absolutely fine. If there's anything at all to snap we have to wait to see, but at least there seemed to be a nice slipway in the inner harbour. That might give us a couple of masterpieces to look at later, for all I know.

Looks like we will be sitting here at least over the weekend, so I will need a few things to occupy myself when not working. I had a plan to get up into the top of the mast tomorrow with one of the rangefinders. Since I got the electronic pixelator here somewhere I might bring that one as well. It's quite a view up there, you should imagine. 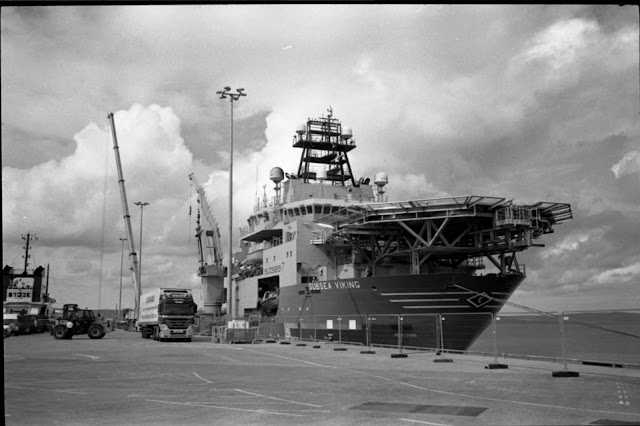 See? From up there on top of that mast I get a nice view of most of the Orkney Mainland, if that was where we were sitting at the moment. As you know it's not, anymore, which means I will need to find other things to put inside a frame. I hope to do just that, some time tomorrow.