It's been a while, again. I know. I'm sorry for that, of course.
You may blame either me, or the fact that there's been difficulties getting logged on from sea during the last few months, but that one issue seems to have been fixed. At least for now... so crossing fingers it will last!

Maybe I told you some time ago that the ship will be going over to Trinidad to do a few jobs over there, and then further south to Brazil and thereabouts. We're on our way as I write this little piece, having just crossed the Bay of Biscay during the last couple of days and will be just off the northern tip of Spain at the moment. This means we got plenty of salty water to cross yet before entering Port of Spain over in Trinidad in about a couple of weeks or so. 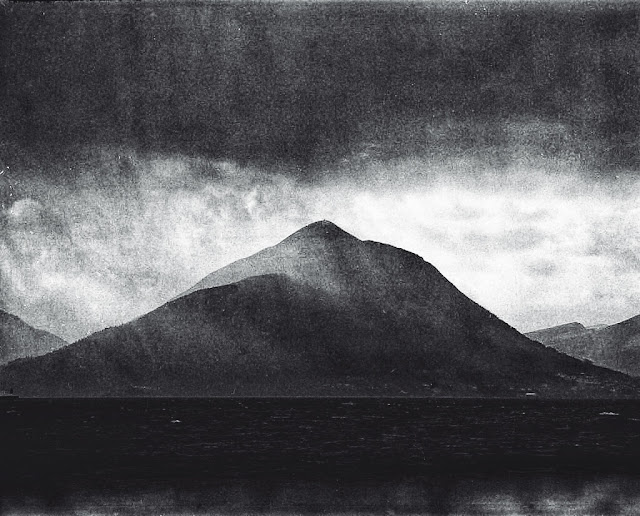 An oldie from some time back. I know it's been posted before, but as my personal computer containing a few of my scannings are not accessable at the moment, this is what you get. The same goes for the other snaps as well... I remember this one was done on one of the Mamiya RZ67 cameras when testing some film a few years back. I screwed up the whole development, as usual...

As you also might know we just barely had time to move out to the tiny island of Ona before I had to go to work. It was great, since you ask. Absolutely fantastic, to tell the truth. I think I was inside the darkroom more or less every day, digging myself into the mysterious world of my new enlarger and a pile of more or less odd paper I got stacked up on my shelves. Up at around five in the morning to see the wife off with the ferry, then settled inside the darkroom from around six o'clock until around two or three in the afternoon. Didn't get anything special produced, of course, but it was great anyway. It's a tricky beast that new Durst enlarger!

The last weekend before I went to work we went away to spend a few days in our house on the mainland, but was due to head back out to the island after the weekend. Stupid move, very much!!
Since we were having plans of all sorts for this weekend I did not see myself carrying a camera for those days, so I left them all out on the island since we were going back on Sunday evening anyway.
Well... whaddayathink? Of course I had a call saying I had to go to work a couple of days early, so had to just pack and leave... without anything at all made for snappingstuff-up.
No cameras, no film... no nothing. 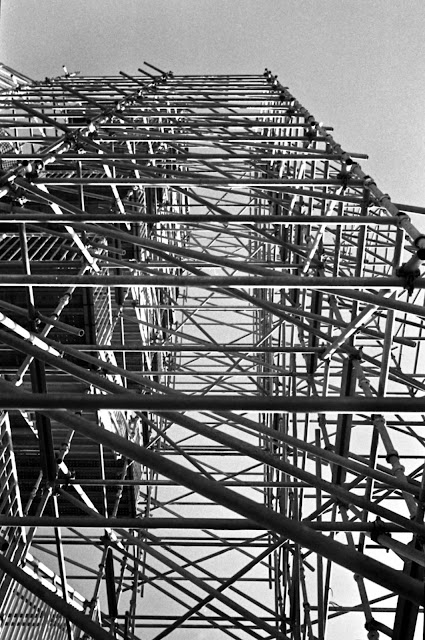 I'm quite a sucker for lines and geometrical stuff at times, as you might know by now. This was an attempt to do something interesting one nice day in Scotland a few years back. I'm not sure if it works or not, but maybe on a rainy day?! Snapped through some M3 or M6 rangefinder with way too expensive glass mounted at the front.

Luckily enough we went through Bergen for work this time as we were carrying out maintenance, and basically making the ship ready for the long trip over to warmer waters.
In Bergen you'll happen to find the only shop of this kind in Norway selling old cameras, film, lenses... so yes I just had to pay that cool Italian owner of the great shop a visit. For old times sake only, of course.
I (believe it or not...) ended up with an old Nikkormat FT sporting a very well worn 50mm lens from the mid to late sixties. Got them cheap enough, which makes it somehow worth the trip into town.
So why on earth a Nikkormat, you might ask? Well... it's cheap, and manual... and you can obviously use it to hit something hard should it be needed. Looking at the two cameras I had to choose between (very much driven by my tiny budget this day, not the selection of beauties inside the shop) was a selection of Nikkormat's and one of them darn Nikon EM things. Easy choice for me anyway. Besides, I got two of them EM cameras already, and none of the Nikkormat's. Up until now, of course.
The Nikkormat FT was originally released as more of a consumer end camera from Nikon back in the days around when I was born about 50 years ago. Still it was quite an expensive camera back then, and nothing most people (over here in Norway, anyway) would actually even consider buying for the household.
It got it's own quirks and oddities the Nikkormat, but seems to be about as solid (and at about the same weight) as a good old brick. My example are far from being in mint condition, but it still looks a lot better than Don McCullin's old Nikon F did after being shot... 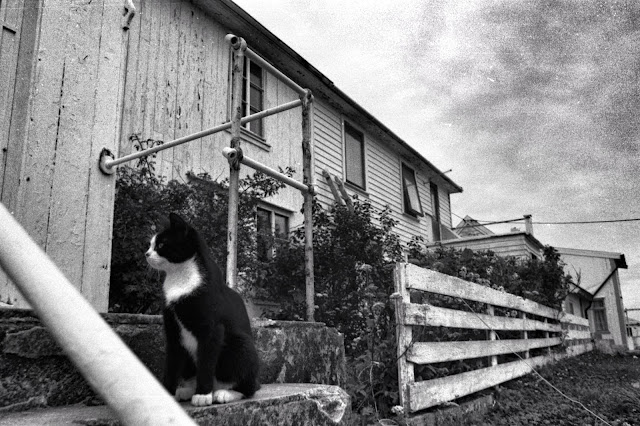 Another one from days long gone. This one dates back to some time mid 90's, probably snapped with my (then still alive) Canon AE-1. I can tell, since that was the only camera I had with a wide angle lens back in those days. Got it cheap from a friend, I vaguely remember.

Oh... and then there was this girl advertising her Diana F+ camera with all sorts of extras, which I also bought. She was living just around the corner from where the ship was laid up, so that was just a short walk away. Got the whole bunch of equipment for NOK 100,- which will equal something like a tenner over there in the British sector of the North Sea. Not bad... but then again they're actually worth nothing much, them Diana cameras. I got a few of those, so I should know! 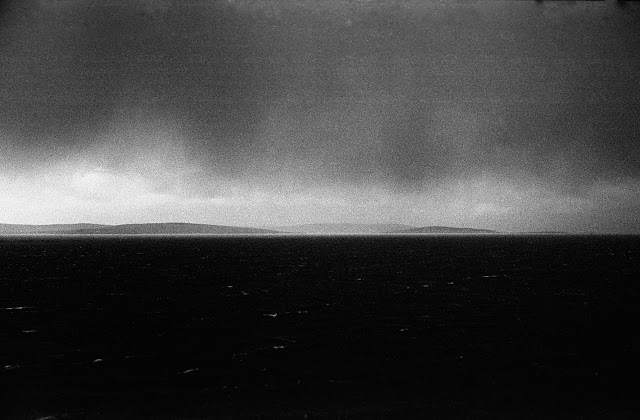 A rather grainy and grimy one snapped in the Bay of Kirkwall in Orkney some years back. I remember there was weather coming in, as it usually did around that place. I simply loved the light over there. Not all the time, but most of the time.

Jumping back to the Nikkormat it seems to be working sort of great. At least it does so after giving the old shutter some good exercise
as it was acting quite a bit sticky in the beginning. It seems to get the job done, and I'm not asking for anything more to tell you the truth. The Italian dude made all sorts of woodoo-like stuff with it before he sent me away with the thing as well, so it should last for a while I presume. I once bought my Rolleiflex from the same guy. That one still works as well, so he's obviously a great repair man after all. I know he fixes German Rangefinders and things like that, so he's probably good at what he's doing. 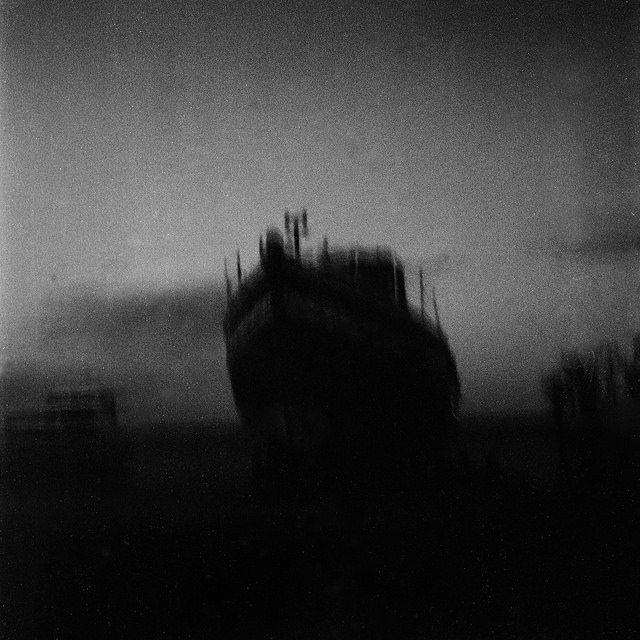 The boat on the slipway in Kirkwall, Orkney. I remember snapping this one with the Rolleiflex in more or less pinch black darkness. I think there's something like a half an hour worth of shutter time in there, or at least something like that. I remember resting the camera on some pallet or whatever, keeping pressing the shutter until my fingers couldn't take it anymore. Could very well do with another half an hour, but this is what you get when you don't bring a simple cable release in your pockets when walking away with a camera into the darkness...