A tiny girl and some huge, heavy walls in Oxford It happens to me all the time. You want to take a snap of something, and into the frame walks this person from out of the blue somewhere. This time I thought it was kind of OK, though. She looked very good from all angles, and also managed to give some sort of scale to the big picture. A bit unlike most of the other snaps where people seem to come from out of the blue and into the frame. And they must have used a lot of stone to build them walls over there, in Oxford.

See, I have been around this area as well, walking the streets of old Oxford just to get a very tiny look at how things seems to be around that part of the world. Stone upon stone, as any other old town, I would say. The stones are plentyful though, and put together in nice patterns by someone knowing what they were doing, back in the days.
The first university was built here in 1320. Or, so they say, anyway. There was education at high levels going on a few hundred years before that as well, but let's just keep things simple and say that the first university was built around 1320.
I mean 1320!
At that time over here in Norway we were still knocking each other in the head with stone tools, and the first university were still 500 years away from seeing anything close to daylight.
No wonder I felt a bit like stepping on old and historic ground as I moved around inside this area. 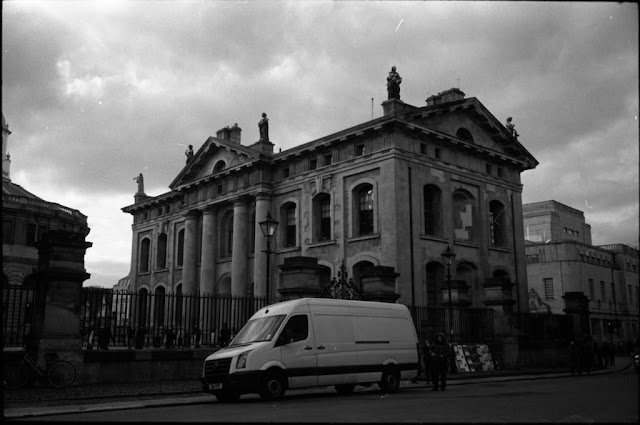 And when I finally get here, and want to make a decent snap of one of them old and fantastic buildings... this car was put there right in front just for the heck of it. That's what I think, anyway. I spoiled a frame and never looked back!

The first time we wanted to go to Oxford, four or five years ago, we missed the whole opportunity big time like. I went off the M-something where some road sign told me the Oxford direction was, and before anyone knew what really had happened we were rolling on the same motorway once again. Heading for London, or wherever. I still blame the reader of the map sitting in the passenger seat. The reader of the map still seem to blame the driver...
Anyway, we decided to give it another try this year just to get some first hand knowledge if the town was just a fiction or not.
Very much real it was, I must admit.
Lagt inn av Roy Karlsvik kl. 23:42