Busy days in the Snow

Back home again, just in time to get the first real and serious snowfall straight in my lap. I was really busy enough without having to use a lot of hours getting rid of that stuff as well to be honest.
I'm on the move, as you might remember. Moving up to the tiny island to hopefully dig myself down inside the darkroom to produce some prints, or at least waste some of the darkroom paper which seem to keep on adding up in piles.
I just turned the milestone of 50, if you didn't know. Since no one would ever think I needed a new enlarger for my darkroom, I had to go buy one myself. Which I did.
Huge thing, don't you know. 4"x5" Durst Laborator 1000 sort of a beast. OK, I've seen them bigger, but at least it will take a small large format neg if presented on the neg carrier. Which might just as well happen some day soon. 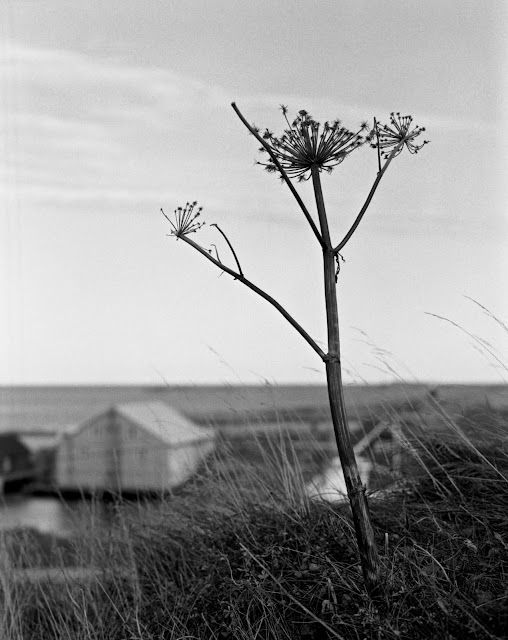 Sure, from the Island where I'm soon to be living. This stuff is all over the place, so one can only try to do the best out of the situation. This one's from one of the Mamiyas snapped on Ilford FP4+

I had this telephone call coming my way a few weeks back. The Big Boss of the library in town asked me if I would consider to produce a few photos to hang on their wall for a month or so. My initial thought was "no way", which I also told her... but then she started talking me into it, and now I need to come up with something really bright before summer ends.
The Wall inside the library is brand new. Or, The Wall is not new as such but the idea of using it as an exhibition area for photographs is brand new. She's a bit into photography, the new Boss of the library. Got a great collection of nice books on the subject, and everything they do.
Enough about that. I decided to go for something else this time. Or at least I want to try to go for something else. I just made a couple of (what I think might be) rather wide angled pinhole cameras, and hope to give the locals a totally new view of their home town.
4"x5" Foma Retropan 320 and Fomapan 100 film is on order and expected arriving tomorrow, and with the cameras also in place I hope to run a few tests with paper soon before I load some film into them and start the mission towards glory, fame and fortune.
I'll do everything myself, of course. From the camera making to the prints themselves. I'll make sure I post whatever might come out of it.
If everything fails I can always put together something else. At least that's what I keep on telling myself. 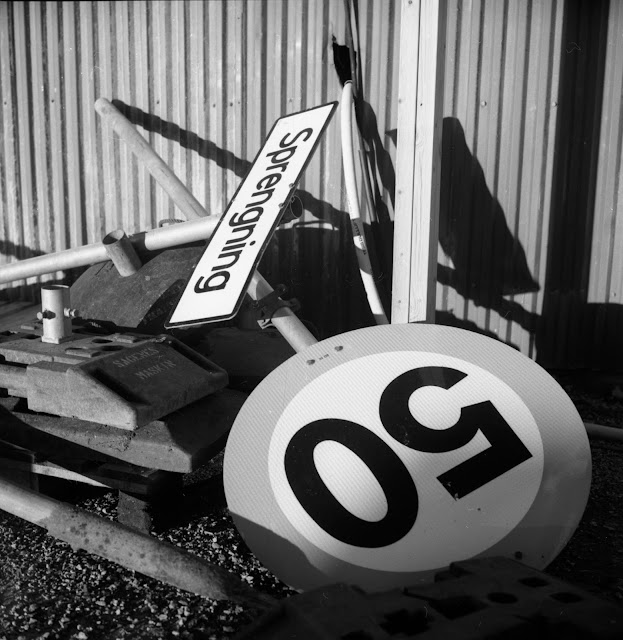 I don't know. Some sort of road sign crash... snapped up with the Rolleiflex a few months back when there was still some sort of daylight present. Right now it's like the dark ages over here, but there will be light again some day. I'm quite sure.

And by the way, I got a few prints hanging on exhibition right now inside the old factory thing. I had them all printed inside the darkroom and everything, then some bright dude decided to print them on dead paper with ink instead... via some computer?! I found myself gasping. Loudly!
Anyway, the prints are there for folks to grab should they feel the need. Which they probably will not.
On the upside I'll get rid of a few of the original darkroom prints, since there's people around wanting them for Christmas. Which in turn means that these sheets of ART300 paper were not wasted, for a change.
Lagt inn av Roy Karlsvik kl. 22:39 4 kommentarer: