I finally got the chance of having a day of breathing quite well again, as I was going through some kind of a personal nightmare during the weekend. You might heard of the helicopter crash over here in Norway on Friday? Well, it was one of them totally surrealistic ones. Mechanical breakdown in a way you thought existed only inside nightmares and very bad movies. Probably a blown gearbox, but we will not know that for sure for quite a while yet as the people working on those issues will need some time to find out.
I don't know if you have seen the pictures in the news wherever you live, so I give you one single link just to give you an idea. It was filmed, as it happens. Not the actual crash itself, but a few seconds later as the rotor of the helicopter was flying through the air with no helicopter attached. I mean how often has this happened, that the entire main rotor of a helicopter has been blown away from the rest of the thing like this, and filmed? Good thing is that the people putting the puzzle together to find out what happened will have evidence they never would dream of, just because a young man knew where to find the record button on his mobile phone quite quickly.

The names of the last victims were finally released Monday. As this was an offshore transport helicopter there was a fair chance I knew someone on board that thing, but I could not be sure until all names were officially determined. Just to add to the entire horror I also know a number of pilots and technicians working for this helicopter company, as many of my fathers former colleagues from his life as a helicopter pilot inside a different division of the same company had their daily work in CHC. There was this pilot, 57 years old from Bergen... which I suspected very much I knew too well.
OK, names out Monday evening, and it turned out he was not flying this helicopter at the time it decided to totally self destruct.

I have spoken to one of the victims a few times, as he used to be a service man for a company we use a lot on board the ship for checking bearings and changing special parts from time to time. Another one of the victims was from the same small island on where my company got it's head office, and a lot of my colleagues will most likely know her very well.
The area the helicopter fell down is just in the neighborhood of where my last ship (the Viking Energy) was based, and a lot of my friends from back then was living and had grown up in this area. Two of the casualties was living within only a few kilometers from where they went down.

There's a lot of my colleagues and people I know who have lost close and more distant friends in this accident for sure, as this country is not that big after all. The offshore working environment is not that big either, so we will always know someone who knows someone.

May they Rest In Peace, all the 13 souls who went down last Friday, on their way home from the North Sea. 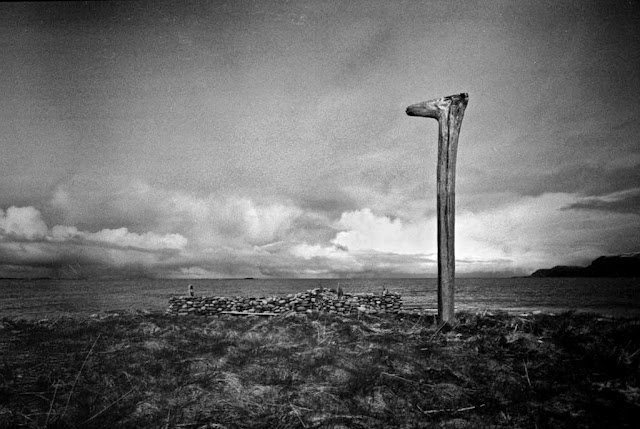 From the north western coastline of the small island called "Vigra" where I found this thing placed, pointing towards the big blue North Sea about a week ago. The weather was nice and we were having a nice walk on this beach of stones and sand. I brought a german rangefinder, or two. This is from the M3 one, with the Elmarit 21mm lens and orange filter attached. It's making the thing vignetting a lot, that filter as you see.