First of all I just have to say that I'm truly sorry for the very temporary use of the Fuji X-pro1 pixelator and killer of all well thought through snaps!
It's the captains fault, as it usually is... Today it's more about the words, though, so any snaps would actually do the trick I would say. 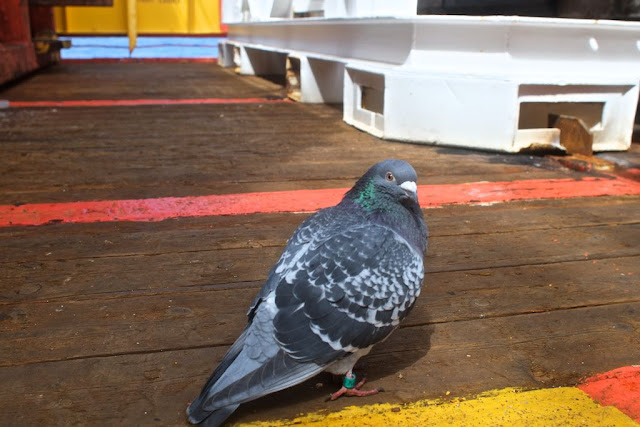 We got this victim on board. The only thing is I'm not absolutely sure that the thing looks upon itself as being a victim of anything at all to tell you the truth. But you will have to read through the whole thing to actually make your own decission about that...

I'm personally very happy I'm not a pigeon with a broken GPS inside. You get kind of weird when that happen, as you are soon about to learn. People will act in very different ways towards you as well, and you might start to wonder what they actually mean by the way they suddenly decide to do their stuff.

Let's say you're a bird. A pigeon in this case, with a broken GPS system on board. A breakdown of the navigational aids usually is no good, and especially when being of a breed that are meant to have these instruments all in good order.
But even though you have some trouble to distinct north from south and such, you still happen to find this ship moored alongside a pier up north in well, lets say Kirkwall Orkney just to take a completely wild example from out of almost nowhere.
You make your landing all in one piece and decide that the lads on deck there on board that ship seems to contain a touch of class by the way they have no problem sharing a bit of their hard earned food with you. You would most certainly still know that food is good for you even though your navigation system has broken down, which mean you should still have a fair chance to survive.
What you probably don't know too much about, being a pigeon from somewhere, is that you will also be impressively well equiped with green rings around your legs. Information is printed on the rings, and human folks will have internet and other ways to, via channels I don't even want to start going through, find out exactly where you used to live and belong.
So, the lads who now feeds you will learn where and who you used to belong to, and will contact your original feeder who then wants to know nothing about you anymore. Because you got a breakdown, you know... severe internal system failure. You see you got this very advanced GPS sytem on board, even though you don't know much about it yourself, and it's obviously FUBAR and hence you're of absoulutely no further value to your previous feeder anymore. You should be able to get home on your own. That's the one and only purpose to keep you, even though you did not know anything about that youself, until this fact struck you at this point in life.
"The Lads Who Feed You Now" will then send another polite e-mail to your legal owner, but no... it's way to expensive to put you into a cage to ship you from Orkney down south to the south coast of old England, where we know for a fact you actually used to belong back in the days before that short circuit incident you know. 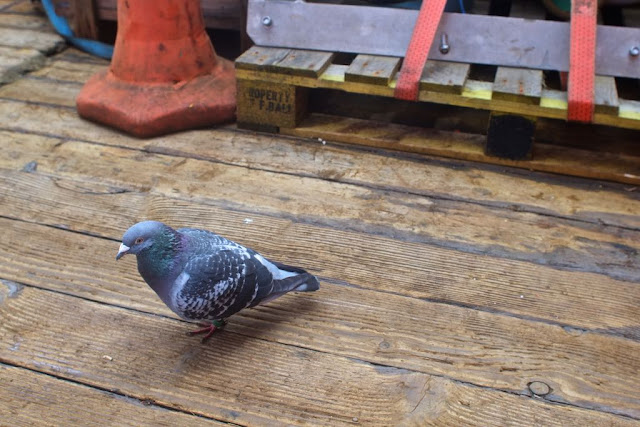 Hey... who could possibly say "nope" to get back a perfectly good looking creature like this one? The old man must be totally nuts if you ask me. It got wings that works and everything...! The digestion systems also seems to be perfectly fine. OK, there might be a few things maybe not all up to standard, but you can't have it all - all the time. Can you?

Then other and stranger things starts to happen. You will get thrown overboard by the new feeders, onto the pier where you have absoulutely no intention to stay. I mean, the same good lads that feeds you with one hand will try to get rid of you with the other. Not one time only, but several.
Well, luckily you got wings to get on board back on deck again. so the fix to that issue is easy enough. Strange thing is that the throwing overboard stops as soon as the ship leaves for sea. Then it's back to the good old feeding again, and life is just how it's supposed to be.
Being a pigeon you can also just look away from the fact that other birds usually will die within a few days if left on the deck of a ship. You are just too clever to let that happen to you.
So you stay alive, even though the Lads who now feeds you have splitted into two different fractions. One of the teams will not feed you, while the other one will.
The team that will not feed you are writing these Stop Cards to make the food stop coming your way because of some health and safety issues, while the other team luckily carry on as before no matter how many cards coming into the head dept. of the ship. It's like winning the lottery, in some kind of weird way. Not only are you still getting food, but you manage to draw a whole lot of attention as well. You become a star to some, and a pain in the butt to others. People getting paid serious kinds of money are discussing things related to your welfare around a big table, every day. You are mentioned in the minutes of meeting and everything. Thousands of GBP has already been used on discussions around your person, instead of the same bunch using a hundred or so to get you back to that old grumpy man down south. 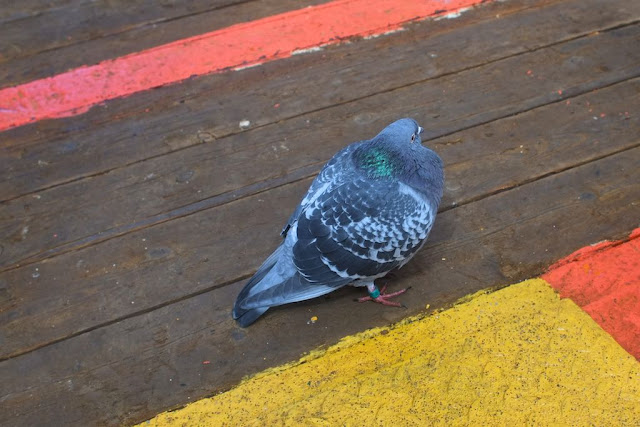 According to the captain there might be more than a simple navigational reason why it refuses to fly away... He seems to be of the impression that it might struggling with a minor weight problem as well, and that it seems getting worse for some odd reason. Well, I know nothing about that, at all...

Then you come back in, to e.g. Kirkwall, Orkney and the same thing starts all over. Thrown overboard, flying back on, more food, more cards, more attention, more throwing overboard. Luckily you are either very patient about the whole thing, or you have some other connections broken as well in addition to your GPS system.
And out to sea you go, one more time for another two weeks trip. And a new set of faces has come onboard, and then there's all these photo shoots. This time with both new and old cameras. Because you like to stay close to the lads on deck, but not too close. Just barely outside the reach of a hand. That's exactly close enough. And now there's rumors saying that you're even on somebodys blog as well! The Times really are A'changing from that old rotten saggy shed down south, to a life in luxury and fame up north.

And inside all these meetings going on, still none has even dared mentioning the quick sollution, and none ever will. Because it's a big and very well known company hiring the big ship you found, and they would never ever do the quick thing. Policies, you know.
Man, it's a nice life to be a pigeon on board a ship up west of Shetland these days!
The lads? Oh, they're inside at the moment... eating their chicken.